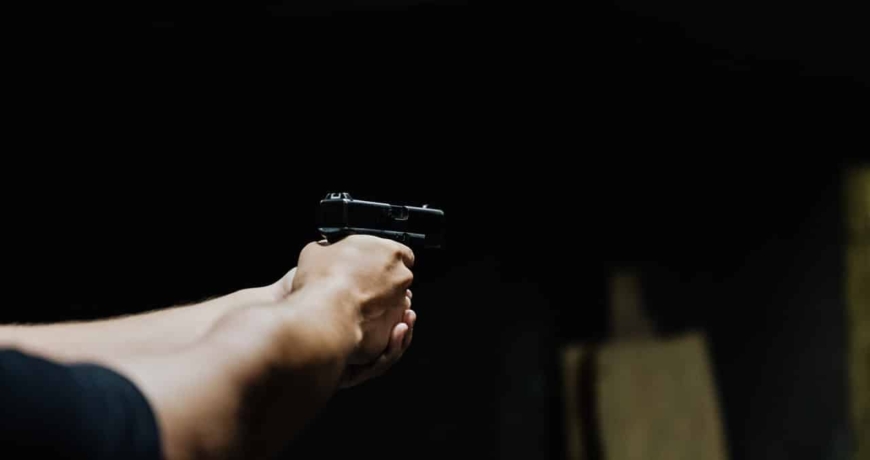 The world of firearms is constantly evolving, and the bar at which we measure our weapons rises along with it. However, today, two micro-compact pistols stand out as being as close to the gold standard for concealed carry weapons: The SIG Sauer P365 and the Springfield Armory Hellcat.

If you haven’t already purchased one or both of these firearms, you might be wondering which one is the better pistol for your preferences and what the most significant differences between the two are.

The SIG Sauer P365 has become one of the most popular concealed carry handguns in recent years, mainly due to its size, weight, and portability.

This low-profile firearm produced in 2018 weighs only 18 ounces with an empty magazine and weighs just a hair under 23 ounces when fully loaded. In its base model, the SIG P365 is one of the lightest commonly owned handguns in production.

In addition to weight, the SIG P365 is a favored option for everyday carry due to its small frame. This SIG Sauer model is slightly taller and wider than a few of its counterparts but is still a highly compact pistol at 4.65 inches from the top of its slide to the bottom of its magazine. In addition, the grip of the base model SIG P365 is 1.02 inches, with a slide that is 0.9 inches wide.

The standard SIG Sauer P365 is slightly lighter than the Springfield Hellcat and a touch bulkier in height and width without any weapon accessories. However, the SIG P365 is still a handgun with better concealability than most, making it a well-liked option among gun enthusiasts since SIG Sauer began production.

Just like the SIG P365 produced one year before it, the Springfield Armory Hellcat became a popular concealed carry weapon from the moment it was available.

Despite being slightly heavier than the standard SIG P365 when fully loaded, the base model Springfield Hellcat is still a lightweight firearm for enthusiasts looking for an easily portable CCW. The Springfield Hellcat comes with two flush-fitting magazines with capacities of 11 and 13 rounds. When fully loaded, the firearm weighs 23 ounces and 24.2 ounces, respectively.

However, without a magazine or even with an empty 11-round magazine, the Springfield Armory Hellcat is lighter than the SIG Sauer P365. The firearm without weapon accessories weighs 16.1 ounces when completely vacant and 18.2 with an unloaded small-capacity magazine.

The Springfield Hellcat’s frame is equally as small as its weight. With its smaller magazine size, this Springfield Armory firearm is one of the most portable concealed carry handguns available, standing at just 4.03 inches from the top of its slide to the bottom of the magazine baseplate.

In both size and weight without a magazine, the Springfield Armory Hellcat is the smaller option relative to the SIG P365. However, the Hellcat is longer than the SIG Sauer model at 6.03 inches than 5.80 for the P365 and is heavier when fully loaded.

Regardless of specific comparisons, the Springfield Hellcat and the SIG P365 are easy to carry and conceal firearms that have become two of the most popular options available for gun enthusiasts.

Of course, size and ease of concealment are just a couple of the many aspects that go into making a solid micro-compact pistol. If the firearms weren’t accurate or felt unpleasant to handle or shoot, the SIG P365 and Springfield Hellcat wouldn’t be among the most popular guns on the market.

Whichever model firearm you choose will mainly depend on your personal preference for those other design aspects. While the SIG P365 and Springfield Hellcat look and feel the same at first use, the subtle differences in their sights, reliability, and ergonomics will play a role in which gun is the better fit for you.

Like their size and weight, the Springfield Hellcat and SIG P365 are similar in their controls, with only subtle differences separating the two firearms.

For starters, both the standard models of these firearms come without a manual safety feature. However, the P365 and Hellcat began offering those security features as optional add-ons shortly after their initial release. Both of them come in the form of ambidextrous, low-profile thumb safeties that are easy to reach from the traditional holding position.

In addition, both the P365 and Hellcat have reversible magazine releases, but this is where the differences between the firearms begin to show up. The magazine slide release levers for the Springfield Hellcat and SIG P365 come in different sizes and styles with contrasting pros and cons depending on the user.

The P365’s release lever is practically flush with the rest of the firearm, while the release on the Hellcat is slightly larger than the P365’s and stands out more. Since the release on the Springfield Hellcat protrudes out, gun owners with larger hands or unconventional gun-holding methods might have difficulty adjusting to not accidentally triggering the release. On the other hand, users of the SIG Sauer P365 might find its less button-like release challenging to use naturally.

The magazine releases on the frames of both handguns sit a nearly equal distance and location away from the trigger. However, the Hellcat’s requires little force to trigger, while the P365 needs more push to release its magazine.

Generally speaking, most gun enthusiasts view micro-compact firearms as less accurate than their larger counterparts. However, the perception of both the SIG Sauer P365 & Springfield Hellcat is that, despite their size, they are accurate and easy to aim at.

The most significant determining factor in firing accuracy will be the user wielding the pistol, as with all firearms. But on a more specific level, there are slight differences in the SIG P365 and Springfield Hellcat’s designs that will go a long way in shaping how accurate they both feel.

With the SIG P365, the accuracy benefits mainly come down to the feel of the trigger and the aiming features. The standard model P365 comes with a high-contrast green ring in between the sights to help users align their vision while firing. In addition, the trigger has a quick reset and a light take-up, allowing it to feel comfortable and contribute positively to accuracy.

Similarly, the Springfield Hellcat also has a lightning-fast reset to help maintain accuracy. The Hellcat trigger is similar to many Glock models, allowing for smooth breaks and a quicker reset than the P365. However, it can also feel stiffer than the one on the SIG Sauer.

Beyond sight features and the trigger, the P365 tends to have a lower recoil than the Hellcat, allowing users to get back on target quicker. Most gun enthusiasts agree that the SIG P365 is the more accurate firearm, but there is no clear winner since accuracy depends on the user’s preferences.

Since most gun owners use micro-compact pistols as concealed carry weapons, you must be able to trust them as close to 100% as possible since you will be relying on these firearms for self-defense. And as far as reliability goes, both the P365 and Hellcat are considered trustworthy CCW options. Beyond their similarly reliable accuracy, the SIG P365 and Springfield Hellcat will rarely ever fail you as long as you’re performing regular maintenance.

Without upkeep on your firearms, they can begin to lose a level of functionality and can even become less accurate over time. But the P365 and Hellcat are compact pistols that are easy to maintain as long as you commit to their upkeep, and both are equally reliable when maintained properly.

Sights are another design aspect where the SIG P365 and Springfield Hellcat are near equally strong, and where which firearm is the better fit will come down to a matter of taste.

Both weapons come with day and night sights, with all models of the P365, including the newer SIG P365 XL, relying on XRAY 3 sights. The XRAY 3 uses a 3-dot tritium system that stays illuminated in the darkness and remains bright during the daytime.

On the other side, Springfield Armory equipped the Hellcat and the Hellcat OSP (Optic Sight Pistol) with U Dot front sights. The U Dot system similarly stays illuminated in both the day and night but is unique because of the sights’ shape. As the name might suggest, the U Dot sights have a slightly curved notch in the form of the letter U.  In addition, the notch has a white outline to help direct the user’s vision back to that area.

The U Dot sights are less traditional than the XRAY 3, which doesn’t have a white U outline and has a notch with rigid angles rather than a curve. Springfield Armory designed their U Dot sights to feel more natural and accessible, but longtime users of SIG Sauer firearms might have difficulty adjusting to the unique product.

The ergonomic feeling and handle of these two 9mm pistols might be their most substantial difference. However, the SIG Sauer P365 and the Springfield Armory Hellcat are still similar in their appearance.

The grip texture between these two gun models feels the same to hold, but the grip on the Springfield Hellcat goes higher up and covers more space on the firearm. The extended grip can benefit gun owners with larger hands and can be a reason to side with the Hellcat over the P365.

But while their grip textures look and feel different, the grip itself on the two firearms is a different story. On the standard model of the Springfield Hellcat, the grip is thinner and more rigid, while the SIG P365 comes with a bulkier and more rounded grip. The difference might sound slight, but a rounder grip can fit nicely in average-sized hands.

On the P365, serrations are more pronounced than the Hellcat’s but are squared off and don’t extend over the top of the slide. On the Hellcat, the serrations go entirely around the slide and are a bit less square. The length and shape of the serrations give the Hellcat a slight advantage in comfort, but some users might prefer the square serration the SIG P365 offers.

The SIG Sauer P365 and Springfield Armory Hellcat are top-of-the-line micro-compact firearms that make for equally high-quality concealed carry weapons. The most significant difference in which one you should purchase primarily comes down to personal preference.

If you want a lower capacity but lighter and more accurate firearm, the P365 is likely going to be your ideal option. On the other hand, if you want a gun with a high capacity 13-round mag that’s more robust and comes with user-friendly sights and grip textures, the Hellcat will work better for your preferences.

But if you’re somewhere in the middle, someone who likes some aspects on one firearm but wishes it was stronger in other regards, you don’t have to settle for a lackluster product. With conversion kits from CAA USA, you can take your micro-compact firearm, and custom fit it with the best equipment available for optimal performance.

CAA USA creates handgun conversion kits targeted for Armed Forces use and offers that technology to the average gun enthusiast. With just one of our standard conversion kits, you can overhaul your pistol’s long-distance accuracy, stability, and durability with our team’s high-quality materials.

In addition to boosting the specs of your firearm, a conversion kit from CAA USA can offer room for a range of weapon accessories, such as suppressors, a Velcro strap fastener, a spare magazine holder, and more. No pistol disassembly is required, just enhanced firearm performance in a matter of moments.

To learn more about the team and products available at CAA USA, call one of our sales representatives today at (754) 205-9385.

So What Is The “Best” Handgun? Well That All Depends On The Shooter

Taurus G2c Review: Everything You Should Know Before You Buy

Are you looking for an affordable gun that has all the features of a high-end pistol? If that…

How to Hold a Handgun

Some people may think that the way you hold your gun when shooting does not matter. That belief…